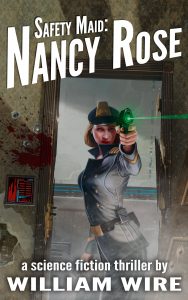 One hundred years ago a deadly super-virus infected humanity, killing off the world’s male population. Women have ruled alone ever since. When a cure is finally discovered, men are born again. But not all women were happy about that. A secret cult of man-killers called the Sicarii want men to remain extinct forever.

Nancy Rose is a US federal agent under the powerful Department of Safety (an institution that insists everyone conform to their safety rules, or else). She and her fellow agents are specially charged with protecting men from the murderous Sicarii.

After Nancy receives a tip that leads to a party for man-killers, she is set on a path to confront one of the Queens of the Sicarii, the so-called Queen of Spades. Nancy will need to shoot from the hip, aim straight, and watch her back (plus keep her own secrets from being uncovered) if she wants to stop the Sicarii before it is too late.